Ode to a friend 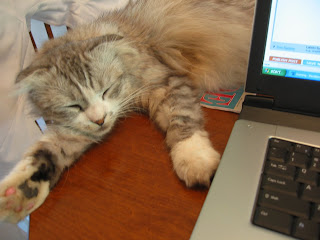 I awoke out of a sound sleep last night in a cold sweat having had a dark premonition Sue told me I had sat up in bed and mumbled about it and then went back to sleep. In the morning when we both awoke at our normal time I remembered who that dream was about. It was my friend Murphy, known to all as Tardo. I dreamed that he had passed on during the night and I knew it to be a fact. It was so strong a feeling. I knew he had gone. I later found him cuddled up under one of his favorite bushes to lay beneath in the backyard. When I first saw him I thought him to be sleeping. he looked so peaceful. He lay there on his side with his hands crossed and his bushy tail curled around him. I gazed at him for a few moments waiting and hoping to see the rhythmic rise and fall of his chest as he breathed. But his breath was no more. He had left this planet. He looked so peaceful and calm. 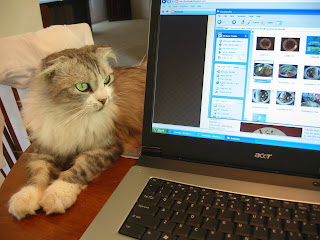 I am not a cat guy to be sure, but this curmudgeon had become my friend and confidant. I would bounce ideas off of him and he would just stare back at me while he lay on my desk and give me that look that only cats can give. you know the one. The one that says don't bother me. I'm licking myself. This cat was my culinary equivalent. He liked his food rustic and honest, Fresh and plentiful. No fancy Feast canned stuff. No way, only Meow mix, dry, straight up. Like me we both where picky eaters.

Tard was only 5 years old when he passed last night. He had survived so much. last year he tangled with a speeding car and lost. the doctor told us he would have to amputate his front leg or he would die. We said no way. we knew that the man of cats would never want to be a tripod. we asked the doctor to clean him up and give us antibiotics with which we hand gave him 3 times a day for a month, while he hibernated in the hall closest waiting for death. he beat that rap and lived another year and had regained 95% use of his bad leg. He was our Lance Armstrong.
He liked to be around the family and would we would allow him to sit on the table when we had dinner. He never begged for food, that would be beneath him. He was the feline equivalent to James Brown. He was cool, calm and totally a man cat. This was no pussy cat. He would back our 80lb retriever into a corner and then strut by and shake his tail as to try to make the big dog blink.
He was a companion to the whole family, He was our cat and our pet, but most of all he was my friend.
I will miss him
at 7:10 PM 1 comment: