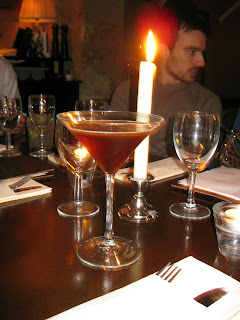 Paris. It started with a cocktail. Doesn't it always start with a cocktail. That liquid libation that, that shot of inhibition reducing courage. But this was no ordinary cocktail, this was "the cocktail".
We had arrived in France the day before around 11AM Paris time and went from the plane to work as this was no pleasure trip. My business associate drove the rental car out of CDG on a blustery day. The rain came in droplets as I drew a picture of the sun over Paris with my finger on my fogged up window as we drove the Peripherie Highway that skirts around the city. I knew we would be in the "mix" in Paris that night and every night for a week. I let out a sigh just thinking if my liver was up to it. My liver has trained hard for this trip. Like Lance Armstrong, I have returned to France, and the French know how to drink and eat. I was ready. The liver of Lance Armstrong and the body of a God. Unfortunately the Gods body I have is Buddha.
We were staying in the quaint village of Sceaux outside of Bourg-la-Reine about 8 miles from Paris proper. 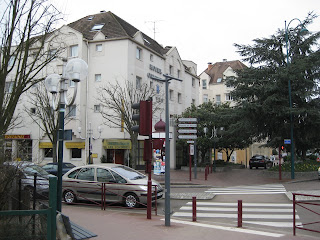 We made contact with our French counter parts and quickly formulated dinner plans. Those always come first in Europe. Business is conducted over a meal and mass amounts of wine. and that meal will last three to four hours. Reggis had suggested a place he knew of in Saint Michel, one of my favorite areas in Paris. I knew it well. He told us he picked this place because the "guy" was well known for his mixology skills. The game was on. we took the metro from the hotel to Paris as no one in their right mind would drive knowing what we would be drinking most of the night away. We met our counterparts at the metro station that exits to the side of the beautiful fountain of Saint Michel around 9PM as nobody in Paris goes to eat before that. It is an amazing site to come up from the underground and see this fountain and the huge statue of the cities namesake holding a sword towards heaven. 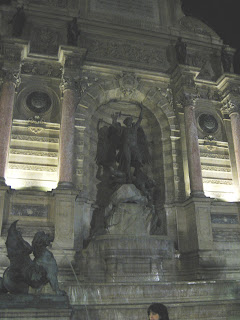 They were waiting for us smoking cigarettes and dressed in the only color that Parisians will be caught in. Black. Paris might be known for it's fashion but they only wear one color here. Black. Black pants, black shoes and God forbid, no one wears running shoes here, not even black ones. And everyone smokes Marlboro lights. we had brought a few cartons of Marlboro lights with us as requested as gifts. apparently the American version of this cancer stick is very much in demand.
After the exchange of pleasantries we embarked on a walking quest to find the guy who is known for his cocktails. We walked and walked and walked for almost an hour. Our guide was definitely lost and he was a local. If you have ever walked the streets of Paris you know that it is very easy to get lost. After a few phone calls we were once again on the right track. I have to admit that I had no clue as to where we were at now. We walked through alleys that had no lights and finally came upon one that was the darkest of all. It just screamed out like a bad horror movie when everyone yells out to the dumb blond, "Don't go down the stairs to the basement!" this was the equivalent, only screamed out in French, Ne pas descandre l'escalier! So of course we followed our guide whom was a business associate of ours, otherwise we would have never gone down this way. And suddenly someone screams out "there it is". No lights on outside and no other businesses open around it, but we had arrived.
I can't tell you the name of the place because it had no lit sign out front. This was a tiny place with 5 tables and a bar that had room for one bar stool. The building must have been hundreds of years old, it was dark and the ceiling was very low. The owner greeted us and had a table ready and waiting, the one lone patron sitting at the bar had to move as there was now no more room for him. It was a surreal evening from the start, Luis Buñuel meets Charles Bukowski. A classic example of Paris, very old building now trendy tiny bistro. The music that was pumping through the sound system was an extreme mix of various tastes, as we sat, the Euro disco classic Daddy Cool by Boney M was blasting away and soon gave way to Yvonne Ellerman singing " if I can't have you" and transcending into German industrial pop. My head was already spinning in a good way. The cocktail guy, who was the owner, sachet up to the table and asked rather coyly if we would like a drink? We told him to hit us with his best shot and so he went behind the tiny bar and started to concoct his best cocktail, he wouldn't tell us what was in it or even it's name. He did all his mixing behind and below the bar he worked feverishly and fast at times he stopped to look around with a look on his face of either checking to see if anyone was watching him or the look might have suggested that maybe he shouldn't be doing this. and then after a few minutes he poured his elixir into a two martini glasses, one for me and one for my Parisian friend. It was a slight golden caramel color with a rose tint to it. It smelled of flowers with a slight herbal woodsy complex nose. It was ice cold and extremely smooth. It flowed down my throat to easily, way to easily. No burn of alcohol. I was told to sip not gulp and after a few minutes I knew why. After my friend and I nursed our top secret drinks for a few minutes I started to feel the back of my throat go numb, starting from my tonsils and slowly moving forward it came. The numbness followed closely by a heat sensation and then the buzz, unlike any buzz I have had before and especially after just one drink and I wasn't quite finished with it. 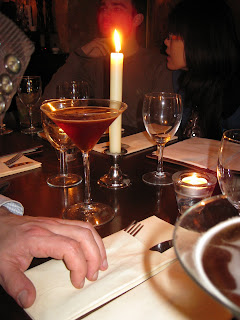 The warmth that started in the back of my throat was now travelling down the rest of my body as if my mind had just emptied it's bladder internally and this warm brain fluid was spreading down the pantleg that was my body. I felt flushed and tingled. I could barely speak as the numbness from my mouth had now sealed it shut like sucking on an unripe perssimon. I really started to panic a little but couldn't show it externally as it would not be a manly thing to do. I mean you can have a heart attack at the table but as a man you cannot say " wow, I think that drink was too strong", that just doesn't fly. After a few minutes the effects of that mystery drink started to wear off as my mouth regained consciousness I drank mass amounts of water. that was an amazing drink. I now wonder if I was subjected to some super secret government elixir and I have nightmares of waking up in the middle of the night with visions of a French creature bursting out of my chest.
The food as I remember was not as much of a thrill ride as the drinks. I had the Foie gras of course to start and it came in a rather unusual way in which I have never had before. It came in a bowl and was topped with a fried over easy quail egg. I wasn't that impressed with it. It had no flavor to it. this place was very dark and it was very hard to take pictures. the French or should I say Parisians, don't like people with cameras. 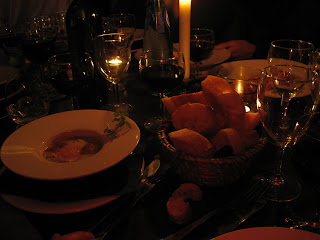 For my entree I had the Risotto with wild mushrooms. Nice texture and flavor to this dish but definitely very different from traditional Risotto which is more soup like, this was very dry and relied on the mushroom sauce for most of its character. Each course took at least 30 to 40 minutes to come out to the table. As most places in Paris a meal will last a few hours. the dishes come out very leisurely which of course gives you ample enough time to consume more wine, which of course we did. This place had a fantastic wine list. It wasn't 70 pages long, just 4 pages in length, but had the best of French classics. Great Bordeaux and Burgundies. We ordered up the Château Hauchat a Bordeaux from the Fronsac wine region of France. Great wine. We ended up ordering five bottles before the night was over. 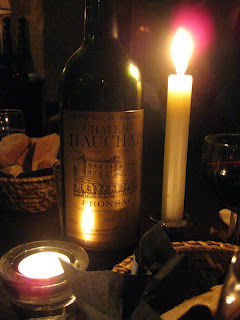 You either love French wine or you don't. It is very different from the fruit forward approach of California. It has more to do with the soil and area than the actual fruit. I love both styles.
And so my adventure through Paris began. We ended up having to literally run to the Metro as the last train back to our station left at 1am.
Somewhere in Paris
Chow
Michael
at 8:24 AM 2 comments: