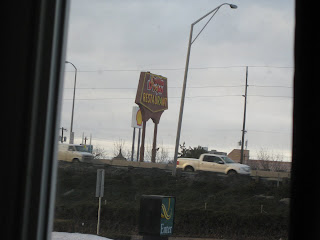 Spokane the big little small town of the Pacific Northwest. The red haired stepchild of the Emerald city Seattle which is a fifty minute puddle jumper plane ride over the snow capped mountains. I like this town. Mayberry RFD all grown up and on its own terms. A city with striking contrasts of tastes and social life. As I gaze out the window of my hotel, across the highway I spot the one place that everyone in Spokane has gone to at least once in their lives. Frankie Doodles. If your not from the area and you are just driving down I-90 you will probably miss it as the large neon sign never has all the lights working a the same time. It could read, rankie oodles or fran dood or anything other than Frankie Doodles.This place has been here for at least 40 or 50 years. Classic open 24 hours 7 days a week 365 days a year roadside diner. Like Denny's, nobody ever sets out to go there, you just end up there. usually after an evening that ends up with you or one of your friends saying something like, "Dude, I can't drink anymore, I need to eat". and it's usually around 3am. During the day the regulars wander in. the over 60's crew, The lumberjack looking guys in their 40's. I actually saw a rather large bearlike guy walk in wearing a stove top hat. I was in awe. Definitely a locals place. If you are a connoisseur of this type of fare you will feel right at home as you are greeted by the gruff but friendly counter waitress as she yells out, "sit anywhere ya want hun". These well seasoned vixens of roadside dinerville have all the same personality. And I find it comforting somehow. A good diner will make you feel like you snuck into a scene from the movie Fargo.

You will somehow lose your license to be a diner I think if you don't have Chicken Fried Steak on the menu. When I'm on the road and it looks like a diner will be my place of choice for a meal. I have to order it. I don't really know why, but I have an affinity for this artery clogging dish. I mean I have ordered Chicken Fried Steak in diners around the country and guess what? I believe I found Chicken Fried Steak nirvana. 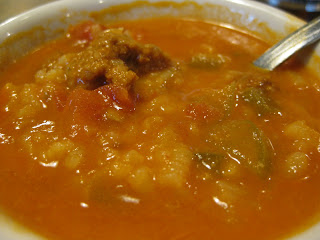 I started my meal with a soup called "inside out stuffed pepper", and yup, that is exactly what it was, only more like a stew than soup. thick and rich tomato with lots of paprika, chunks of hamburger and strips of green pepper all bound together via the starchiness of white rice. this was an outstanding dish. came with two bags of what were once saltine crackers that have probably been on more tables than Anna Nicole Smith in their life.Only these were never used only to be thrown back on the pile. they were reduced to little plastic bags filled with cracker dust, The equivalent to hillbilly pixie dust.
My Chicken Fried Steak came next and with a cold Coors lite. You can't drink nuthin fancy with this dish it would ruin the subtle nuances that the combination of greases bring to it. Beer is only used as a Drano substitute, to clear the pipes so the next heapful can slide down. 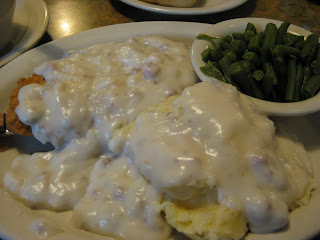 The dish came with a huge scoop of fresh mashed potatoes, with lots of chunks. I like my potatoes chunky like this. And of course smothered with the same Sausage gravy that covered the Chicken Fried Steak. The mashed potatoes had an awsome buttery texture and taste to them. they were really light and creamy. they weren't dry but very moist and surprisingly airy. 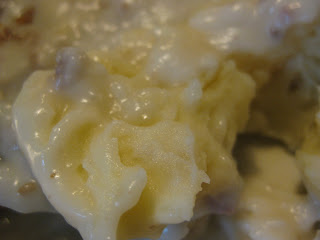 And of course no diner would ever serve this dish without a side of something that once was a vegetable, most times this means a large slotted spoon full of either canned diced carrots or in this case, the ultimate, green beans. Something about the tang of that metal can as it mixes with and becomes one with the green beans and changes its molecular DNA that brings out the best of roadside food. It's clean metal taste reminds one always of Elementary school cafeterias. 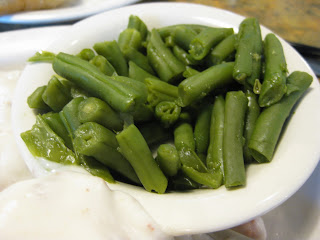 The gravy itself is literally the glue that binds all of this together. The sausage gravy at Frankie Doodles is one of the best out there. It has everything you want in a roadside diner sausage gravy. Large bits of fried pork sausage mixed with flour and either oil or butter roux, with some whole milk thrown in for nutritional goodness. The roll that came with the meal was an odd piece of dough. You normally would expect a biscuit type roll, very dense and heavy. something that can withstand the girth of this plate. But the rolls here are very light, similar to what is called Hawaiian bread or a brioche type roll without the sweetness and very bland. It came out light and spongy and before my eyes within minutes it had morphed rather quickly into a stale and tasteless hockey puck. I was amazed at this quick transformation. Like pulling out a slice of wonder bread in the desert. that's how quick this thing went bad. 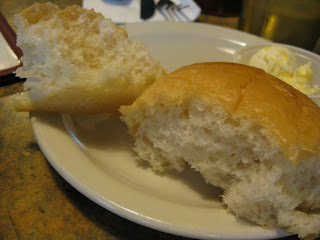 The Chicken Fried Steak was a nice tenderised piece of beef. It was very lightly breaded and the breading actually had a fresh floury breadcrumby taste to it. Normally with this dish you get a piece of hammered beef that is dredged in way to much flour then fried till its black and the gravy is used to cover up all the burned parts. Not here. I could tell that the fried steak was not pan fried but dropped in a vat of hot fat and by the taste of it probably the same fryer as they use for french fries and onion rings. 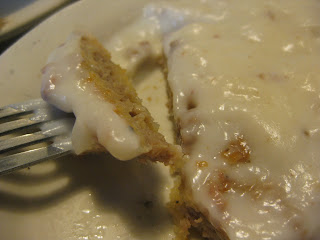 Frankie Doodles hasn't had an exterior or interior paint job in at least 20 or more years. The carpet is worn out and the counter stools upholstery is cracked and wearing. The decor is just classic 1960's American diner and the folks who work here have been around the block a few times. We look at high end restaurants with classically trained chefs as a barometer of class and taste. but we always forget the diner cook and his or hers ability to crank out mass amounts of traditional regional fare without going to culinary school. There is an art to both styles. 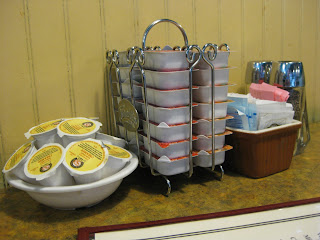 And on every table is this work of pop art. an artsy display of filled condiments on every table. the beauty of this symmetry has more pop art value than any Warhol litho to me. I love places with heart and passion. it can be a Michelin rated restaurant or a taco truck on the streets of Los Angeles. it doesn't matter. if the place has passion and heart. it comes through in the food. This place might not be for all, but then again eating snails with an over priced Bordeaux ain't for everyone either. 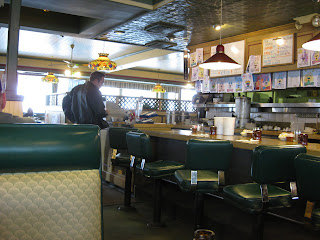