I FOUND YOU, YOU OLD KENTUCKIAN, I FOUND YOU!
I remember years and years ago watching an interview with Wolfgang Puck where he was asked what was his favorite "American" food. He went on and on about how he thought that the American could do better in the kitchen, OK, this was over 20 years ago and he was right, at the time. But he also said and not facetiously, that he thought Kentucky Fried Chicken was one of the best things he had ever eaten.
And I agree. When I was a wee little foody I remember my mom taking us to KFC when she could afford it, which was not very often as she was a single mother of three who worked full time and refused to go on public assistance. we have learned so much from her.
Anyway. I was hooked on this stuff. It was heaven to me. the sweet fried smell of those secret 11 herbs and spices and the heat ripples coming off a perfectly cooked leg as I had to have one even before getting into the car in the cold of winter. Running with a chicken leg in my hand like it was an Olympic torch as I held it up high over my head.
So for awhile now I have been trying to replicate this secret 11 herbs and spice concoction in my kitchen, and I did! 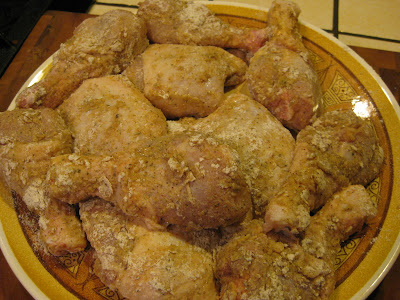 It has taken awhile to do it. But I think I pretty much nailed it. I came up with 13 secret herbs and spices, I had to one up the old Colonel of course. Above is a shot of the raw chicken after I applied the batter. I use a simple egg wash to coat the chicken first and then roll the wet chicken parts in the Killer Fried Chicken mix. then I let them sit for 10 minutes before frying them to golden perfection. 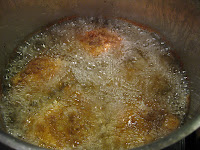 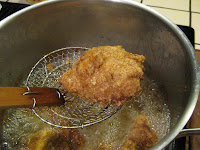 I don't like to use the cast iron skillet to fry my chicken. I don't really like the black or semi burnt parts that it gives fried chicken, I know that in the South, these burnt parts are prized, ehh, not for me I like perfectly golden fried chicken that has an even look and texture. I use a large sauce pan with a heavy bottom and pour in one 48 ounce bottle of a neutral tasting oil such as vegetable or corn oil.
Here's a trick for you. If you don't have a proper thermometer to check how hot your oil is, you can use the tip of a wooden soon. Just submerge the spoon into the oil and hold it. Take a look at the and see if bubbles are coming of it, if so, your oil is ready and should be about 350 degrees. 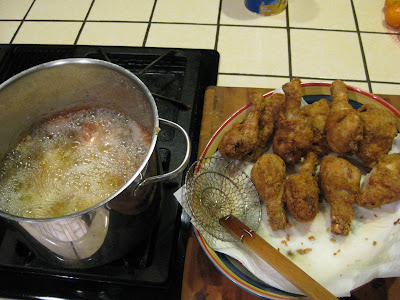 I fry them in batches with pieces that are the same size, turning every few minutes to get them frying evenly. 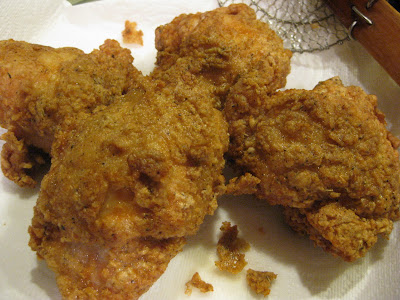 OMG! this stuff is so good. It's like poultry injected with crack!! 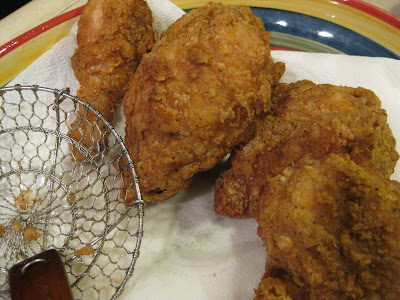 I could literally eat an entire hen house at one sitting and end up blubbering like Renfield catching imaginary flies and giggling to myself. 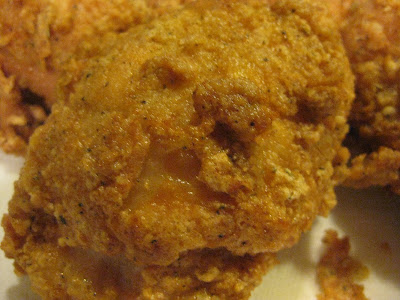 So you might ask, Where is the recipe for this heavenly food of the God's concoction?
Well......I'm not gonna post it! hahahahahahaha......It's mine all mine! 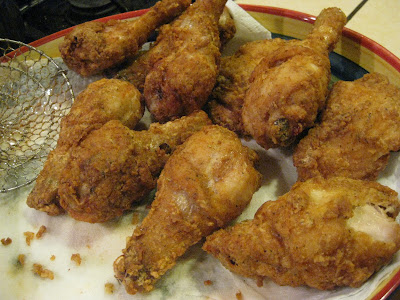 Ok, ok, I'm really not going to post it. it took me forever to come up with it. But if you ask really nicely I will send you some of this heavenly mixture and you will be hooked on poultry crack like I am.

Pink's, the Hollywood legend opens it's newest location at Harrah's Rincon Casino in the Northern part of San Diego.  And I cannot be happier about it, Pink's is one of the most iconic Southern California cult eateries out there. I rarely miss an opportunity to stop at the Los Angeles stand when I am in the area. And now one is a little closer to home.
This place has been open since 1939 and has been serving Hoffy hot dogs from day one. Hoffy by the way is another iconic food maker and in Los Angeles as well.  I know there are a ton of food / hot dog rule makers out there. Ok so even Dirty Harry uttered the phrase "Nobody... I mean NOBODY puts ketchup on a hot dog", But then again Sudden Impact wasn't the best Dirty Harry film either.
We are in Southern California and we not only put ketchup on dogs but Tapatio and Sriracha sauce as well. And oh  by the way, Both Tapatio and Sriracha sauce are both made in Los Angeles. 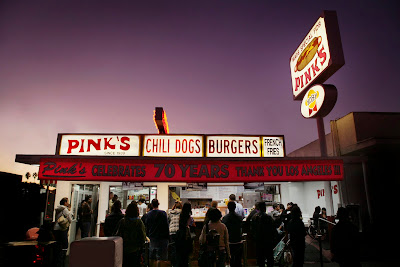 And at Pink's we put chili on them, Lot's of Pink's secret recipe chili. I can eat two or three no problem.
But it's Orson Welles that holds the record of eating 18 at one sitting!! And it's where Bruce Willis proposed to Demi Moore. This place is the keeper of the heart and soul of the city.

Pink's is right there with In-N-Out Burger another cult food Southern California company. There was nothing like cruising down Melrose eating a Pink's chili dog and looking at those crazy Angelyne billboards in the 1980's.

All of the best of Southern California culture met at Pink's the epicenter of it all to eat hot dogs.
Every low rider and Rat rod, starlet and star, stage hand to studio exec, all met and ate here.  And still do.
If you are from SoCal then you know Huell Howser and Cal Worthington , MoonaLisa and Elvira and you definitely know Pink's.


Hot Dog Facts and Trivia:
* Believe it or not, nearly 500 franks are eaten every second every day in US alone.
* In 2009, about 10 billion dogs were consumed by Americans.
* About 15% of these numbers are hot dogs bought from vending carts.
* More than $1.6 billion were also spent on dogs in 2009.
* Every 4th of July, at least 150 million frankfurters are consumed.
* During the Hot dog Season, approximately 818 (or roughly 7 billion) dogs are gobbled down by American hot dog lovers every second.
Most wiener carts and stands are found in big cities. Regular customers are those people who are too busy with their careers that often they find no time to cook real meals for themselves, or to even sit for a full half an hour and enjoy a gourmet dish in a restaurant. Time is too precious and limited for them.
And so to make the most of their time, they go to the nearest cart, order for their favorite wiener and toppings, pay for it and done. They eat the dog with much gusto while on their way to their meeting or office. This is the very reason why franks became the staple food for highly urbanized and very busy individuals.
But which US cities consume much of these hot dogs?
Here are the top five cities that consume a great amount of franks all year round.

#1 Los Angeles
The biggest and heaviest consumers of dogs in 2009 are the people of Los Angeles.
# 2 New York
New Yorkers spend more than $101 million for franks alone annually. And the most interesting thing is that this number is actually increasing regardless of the city's lesser population compared to other bigger cities.
# 3 San Antonio and Corpus Christi
#4 Baltimore and Washington
# 5 Chicago was surprised that Chi town came in 5th. By the way, what is that neon green relish stuff made of anyway? I don't think it's legal in this state.

So jump into your hoopty and head to Harrah's Rincon Casino and throw down a few dogs! 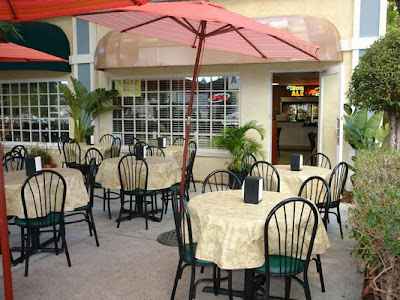 If i had a choice of last meals, Man, this place would be a consideration. Mexican taco shop meets deli and does it extremely well. I never understood why places like Subway and the rest of the franchise sandwich places make it. I mean, I don't get the concept of a salad on an air puffed roll with a fly over of cold cuts. Doesn't work for me. But this place does.
The place had it's start more than 10 years ago with a small busy cafe on the main drag in the La Mesa village. They started to expand around this time as well. There used to be one by SDSU.  Then they just disappeared off the map? Until last year when the owner decided to open up again in La Mesa at the site of where  All'Italiana used to be. And it's the same quality and quantity as I remember it to be. 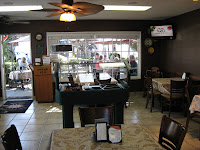 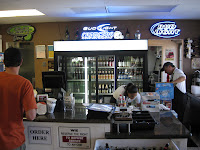 Huge portions on these torta's. Everything has flavor and works well together. 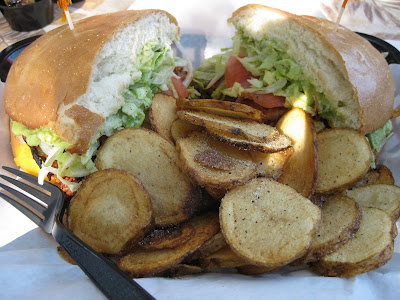 The bread is where it all starts. It's fresh and light and there to hold the massive sandwich together.
I ordered the Beef Machaca torta. I am a machaca maniac. I can't get enough of this stuff. If done right it is sublime, like a Mexican pot roast, tender and flavorful, and that's how my torta was. just so tender and full of slight chili spices. 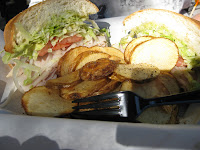 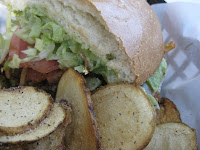 The home fries they serve with the sandwiches are very good. and there are a ton of them. I also am a huge fan of the salsa they have in red plastic squirt bottles. very nice stuff. Lot's of thought went into this menu and it shows. 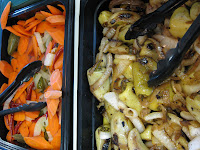 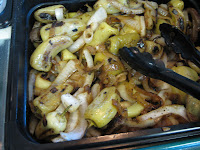 I also like the fact that this place serves grilled chili's as a condiment. they go so well with the torta's.
But the most pleasantly surprising  dish on the menu is the Tortilla Soup. I have never been a fan of this soup. Most places you order it from just destroy it. It's supposed to be a mild broth soup with veggies and beans and tortilla strips placed on top so they soften and melt into the liquid. And the Tortilla Soup at La Torta nails it perfectly. I had heard from a few folks that this is the best soup in town and I'm gonna have to agree it's pretty tasty. 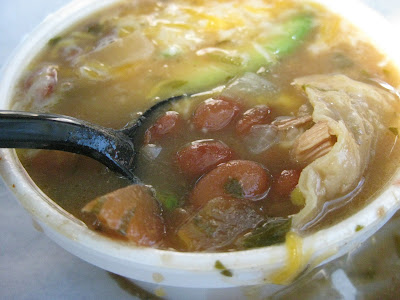 On a cold day like we have been having here lately this stuff is magic.
Here's a shot of the menu, which has traditional taco shop offerings as well, which are very good, but don't match the sheer perfection of the torta offerings. 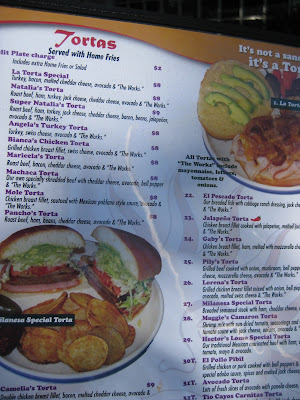 So after you put up that Festivas pole, head out to La Torta in La Mesa. You won't be disapointed.
Chow
Michael
La Torta Cafe
8356 Allison Ave
La Mesa, CA 91941