As I travel in my business I find it fun to explore the local food scenes of the various locales that I visit. Sometimes, when time permits, I make it a challenge to search out local haunts, dives and chic places. Looking for that great local pub with it's own brews on tap or that high end restaurant with that eccentric menu. My ideas of food and dining are as a chef / proprietor it should be your calling and duty to come up with innovative menus, I'm just not talking about Pate de Foie Gras wrapped in pastry with a mission fig brandy sauce that comes to your table on fire. Although, that really sounds good. I'm talking about the person who can put an extra oomph into that Carne Asada or that extra sporty pepper they have delivered from Chicago every week for their customers. that to me makes the place. that extra care and attention, the passion, the excitement that makes people come back. So many places out their simply plod along and maybe that's the reason sometimes I have a difficult time getting around to writing about the places I have visited. just nothing much to say about the majority of them. I envy people like Kirk from mmm-yoso.typepad.com, the Steven King of eating and writing, with such a voracious appetite and the ability to kick out reviews and meanderings every single day, Like Steven King in his prime when he could churn out a 1600 page book a week. Incredible, or Like the Ernest Hemingway of food bloggers, Captain Jack from sandiegorestaurants.typepad.com

Who can so descriptively and eloquently write about every aspect of the restaurant from the food to the service to who the heck is the chef and from whence he came from. I admire these guys.
So when I had the opportunity while on business in the Boise Idaho area to check out the local dining scene I was thrilled, I become like a kid in a candy store. So many choices. As I perused through the restaurant guide. I finally narrowed it down to three choices. One was a Basque restaurant, as the area has a rich Basque history. Leku Ona was the name. This place had an awesome menu including braised beef cheeks and a host of other delectable treats. The other one was the Barbacoa Grill, Oh wow, it looked fantastic, like a piece of artwork the dining area resembled. and the menu was put together beautifully with beef as the main event. And the third one was BerryHill & Co. I chose the last one. The Escargot on the menu sealed the deal for me, Nothing better than minced garden insects swimming in garlic, parsley and Olive Oil, then slathered on French bread,that and it was close to my hotel and had an outdoor dining area. It was such a beautiful evening in Boise that a table outside in the night air sounded like just the thing. Looking at the menu online I had already made my picks. Was in the mood for some local wine and beef, a filet or a big ol rib eye. My mouth was watering for the Black Angus filet Mignon that was on the menu. Sounded so good. all natural northwest Black Angus tenderloin grilled and served under a mission fig-fruit chutney with garlic smashed potatoes. Oy vey!, Doesn't get much better than that.
The place is located in the downtown area a few blocks from the historic State building. I pulled up and found a parking place right in front. No valet, which is just as good. I really am not a fan of valet, giving a 17 year old dressed in a cheap suit and chewing gum the keys to my car, even a rental car does not relax me at dinner. Knowing that it takes 20.5 miles for the spotted owl to mate and only a 2.5 foot back seat for teenagers to do the same does not a rest full evening make for me. If someone is going to violate my car, it will be me.

I walked up to the place around 8:15pm, Their was an acoustic combo playing outside for the evening guests. Dressed in trendy chic high collar white button down shirts and cool dinner jackets. The night air was warm and perfect as I strolled up to the outside hostess. She asked, I answered, one for dinner, I still haven't gotten used to that dining alone thing. Inside or out was the next question, Outside, the sun was still up and warming the night as the moon was getting ready for the night shift.
I should have known something was amiss right away. The place was not filled at all, maybe a 5 tables outside with guests, large seating area with at least 20 tables. Anyway, she sat me right up front next to the chic acoustic combo and it was then that I realized what the tune they where playing, It was a Muzak, elevator to Hell version of "Tequila"? and I was placed 5 feet from them facing away from the rest of the diners and forced to look into the eyes of the creepy guy with the guitar as he strummed the last riffs of this twisted version of this song, as if he was in the last throws of ecstasy with Lizzie Borden, Both doing a hatchet job. Not a comfortable scene.
Thank God the Glass of wine I ordered came first. I love the Idaho wineries, They are very much in the middle between the fruit forward approach of California and the over the top smack you in the face Australian wines. I ordered a glass of Tempranillo, a Spanish grape. This one was from the Sawtooth Winery in Nampa Idaho, Superb it was. Not usually a fan of this grape. most times too astringent and green tasting. But I was going to order a hearty steak and it would demand a Roseanne Barr powerhouse of a wine. $8.00 per glass, Not bad in a place like this.

I asked the waitress, who at first seemed very social and nice, if I could move. " No Problem" was the reply, I asked if I could move inside, As I was feeling very violated at the time, after acoustic combo guy locked eyes on me as he strummed the last chord and made his guitar make sounds it wasn't made for. I think he felt it as well. Two Heterosexual males locking eyes at the moment the song climaxed was not a good feeling.
By this time it was 8:45. The dining room was fairly deserted. I was seated off to myself now. From main event to a feeling of complete ostrication. I was OK for now. alone with my wine. I waited for the waitress to come over and take my order as I was starving now and tired of grabbing food at 7 Elevens as I go about my job duties for the day. I was ready for my first good meal of the week.I waited. Spent time texting my Sue and telling her about my day.

9:00pm, No waitress. 9:15 wine now empty, No bread, No water nothing, set adrift on my table and left for dead. trying to flag anyone down with hand gestures signifying a dining room SOS, I was going down and no one cared. 9:30, the manager comes walking towards my table, I thought OK, This is a good sign, finally noticed and by the manager. I was going to be alright, help was on the way, with an apology and an offer of a free glass of wine I would be happy and ready to order again. He stopped at the end of my dining table slash life raft, I looked up at him with eyes that said " thank you for saving me, and instead of what I was expecting him to say he said, " Kitchen closes in 5 minutes, you gonna order or what?". Crushed, embarrassed and most assuredly angered. I choked back words I would regret later. took a deep breath and said " you have got to be kidding? I got up and walked over to the hostess desk and demanded my bill for the glass of wine. After discussing my evening with the ever so smug manager, he just offered to comp my wine, wasn't really expecting anything else. I told him no thanks and I would pay for it. He offered no resistance and promptly rang me up for $9.25. I looked a the bill and told him the wine was $8.00 on the menu. He just shook his shoulders. I just rolled my eyes and paid exactly $8.00 and shrugged mine.

What a complete pretentious waste of time this place was. pseudo trendy and with a complete embarrassment of a wait staff. Never did eat, so can't say good or bad about that. But what I did discover was a very good little wine region. Try some Idaho wine next time you are in the area. a pleasant surprise. Unlike this horrendous establishment, you will not be disappointed.

I drove my rental car back to my hotel and on the way stopped for dinner at 7-Eleven as it was the only place open at this time. 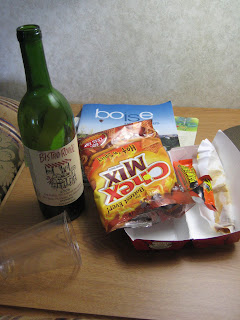