Alone. I am alone in the kitchen on a Saturday? No plans, No kids, No cars that need to be worked on. Just me. So what to do? Well?....Make something man!
OK, so with no plans other than to make dinner for two and the whole day to do it. I just wanted to wander about the yard and kitchen and see where it took me to. 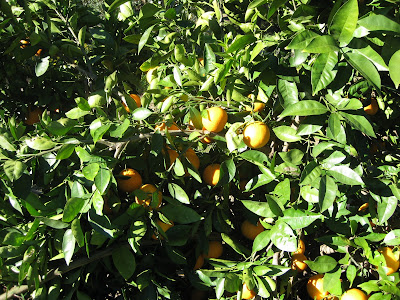 One thing I noticed was that we had a bumper crop of citrus. My God I hadn't taken the time out from my busy days to even stroll through the abundant paradise that was right in front of me. The smell of Navel orange and Meyer lemons just waifed through the air on this beautiful warm day. closing my eyes I breathed deeply filling my lungs with God's perfume. 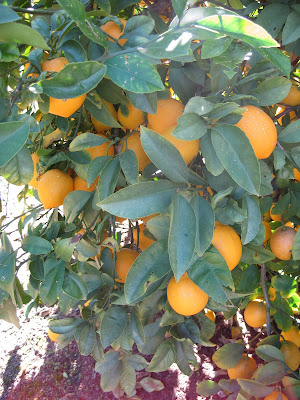 One of my favorite things are grilled citrus. doesn't matter if it's limes, lemons or oranges. Charring them over an open grill brings out all of the natural sugars as they get nice and caramelized. I don't put anything on them prior to grilling just slice them and pop them over an open flame, or under the heat of your broiler. 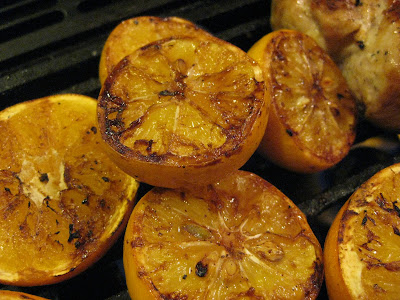 I am really starting to get into dry toasting or grilling. We get so used to pouring Olive Oil over everything we do. If you dry toast your onions and tomatillos and chili peppers prior to making salsa, you will end up with an entirely different taste and more authentic. charcoaly perfection. 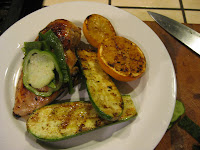 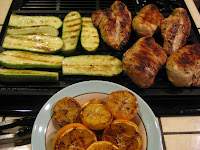 Simple yet perfect natural flavors. grilled chicken with Kosher salt and fresh cracked pepper along with slices of roasted Poblano pepper and my favorite a slice of fresh Tomatillo, yup, fresh not grilled  I love the taste and texture of a fresh Tomatillo. it tastes like a warm summers day.
A bit like chewing on a stalk of sour grass as a kid.
Back out to the yard to cannibalize my favorite tree that will never grow because it calls to me in the night and I have to come by and rip it's leaves off.
That would be my poor Bay leaf tree or Laurus Nobilis 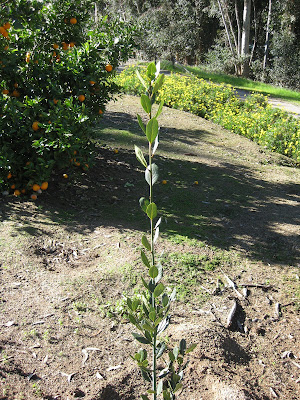 I planted it more than a year ago and I never let it grow because I am constantly raiding it for it's fragrant leaves. I will have to plant another one so I can raid one and let the other grow. 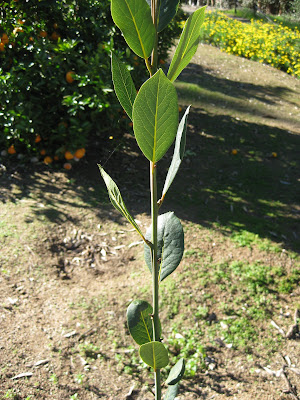 If you don't have one of these growing in your yard, I tell you to run and not walk to your nearest nursery and demand your shrubbery! A fresh leaf of this plant put into a soup or Adobo chicken will transform it into another dimension and once you go fresh you will never go back to dried.
I also roasted off about 2 lbs of garlic. We put this stuff on everything. It's Italian Chanel No5! 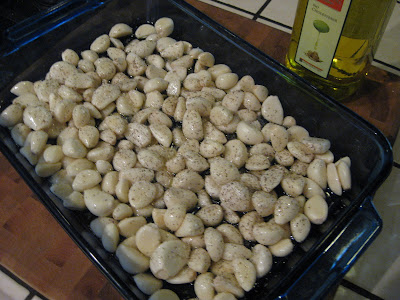 Just tossed them in a pan drizzled some olive oil on them with some salt and pepper, covered them and threw them in a 300 degree oven for about 2 hours. 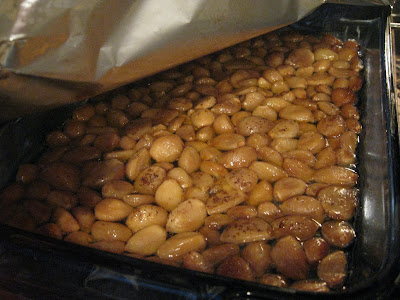 OMG!! I use this for everything. toss a few in some mashed potatoes or stir with some fresh mayonnaise. OMG!! I have to go, that damn tree and that jar of garlic are calling to me again!! 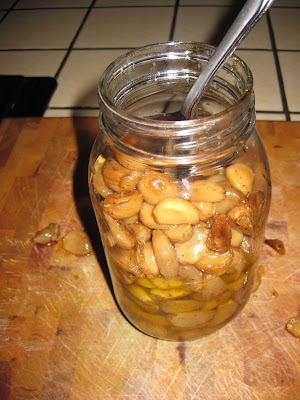 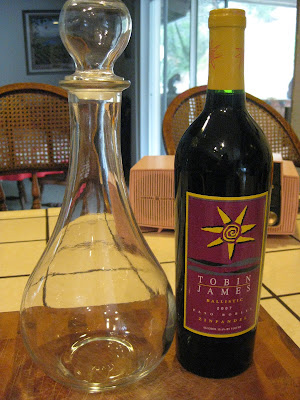 Tobin James 2007 Ballistic Zinfandel is an amazing bargain of a wine. I found this gem at the local wine shop for $17.99 a bottle. I am a huge fan of the red wines that come from the Paso Robles region of the Central coast of California. The reds here tend to be deeply colored and rich mainly because of the intensity of the sun, with fairly bright acidity due to the cool nights. 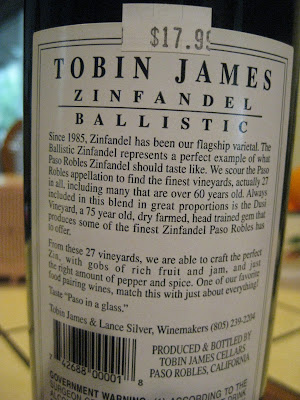 California’s Central Coast is geologically different from other California wine growing regions. Unlike others with deep, rich fertile valley soils, there are four general soil types in the Paso Robles AVA primarily formed from weathering granite, serpentine, shale and limestone, with shale and limestone being the most predominant bedrock types. Soil diversity is the norm and a vineyard block may commonly contain several different soil types.
I love the rich velvety taste and texture that an old vine zin gives you. Nice acidity makes this a great food wine. It was a touch alcoholic with our lightly spicy food, but well-balanced and elegant afterwards. A good value wine. 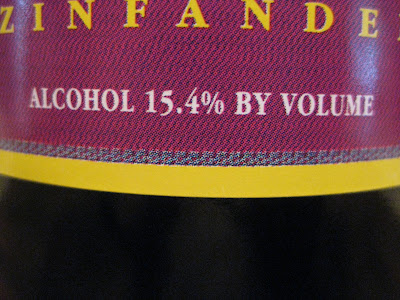 I enjoy most wines at about 13% alcohol as I find of the shelf "bargain" wines are truly no bargain and most have an alcohol content between 12% and 13%.

I f you only enjoy wine on occasion, I believe you owe it to yourself to go to a wine shop and ask questions. You can find great wines under 20 bucks a bottle and this is one of them. 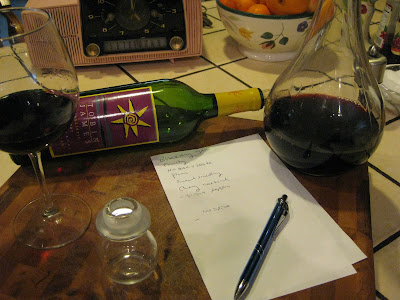 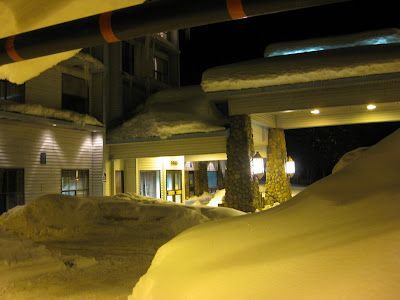 And then it hit. The biggest storm in 100 years, and I swear I heard Sam the Snowman say that as we struggled for the last 20 miles up hill, on roads covered with black ice and with visibility down to it's bare minimum to keep the Pathfinder on the road. We bypassed the signs 5 miles outside of Mammoth that the CHP's put up that say "Chains required, Hell we had 5 miles to go and I wasn't going to stop now for chains. 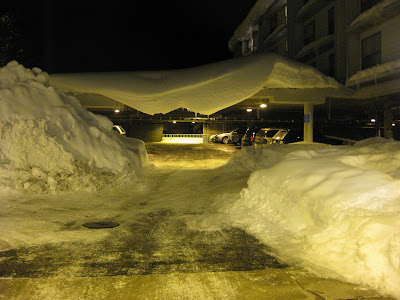 The temperature gauge in the car was pegged at 8 degrees as we rode into town. 8 degrees? I had no idea the gauge went that low.  The entrance to our hotel was just a hole in the snow and after seeing the hotel we changed it's name to the Overlook hotel as it was buried under 15 feet of snow!
we had to drive below that overhang of snow to enter the parking structure. One sneeze and that snow mass would have buried us. White knuckle driving at it's finest. 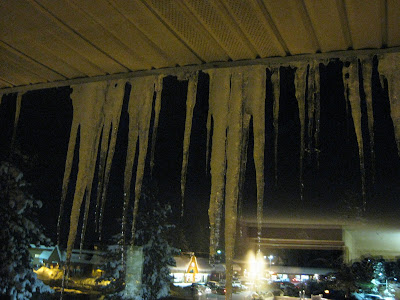 Icicles hung down like Nosferatu's fingers at the front door of the hotel, Curling up like frozen and dead appendages beckoning us to dare to enter. At 8 degrees outside. Hell, we didn't care we ran through them and into the hotel. Once inside we found everything to be normal. a fireplace was glowing and there was an indoor pool with steam coming off of it. My God outside was filled with dancing Jeffrey Dahmer shadows as snow laden trees were lit up by car headlights and they're silhouettes created ghastly stretched arms from their branches that spread over the highway trying to pull you into a ditch. But inside? cozy warm.
Mammoth over Christmas 2010 had more snow then any place on earth! and was stunning and glowing like a Bjork dress in morning. 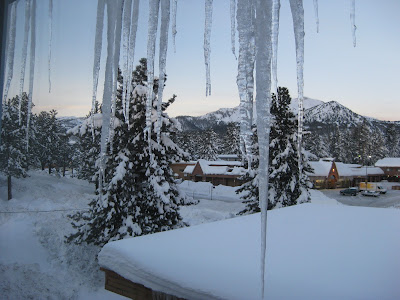 When we awoke the next day the place looked like we were transported to Whoville. Truly beautiful and we wanted to go outside and sing "Welcome Christmas" as it was truly Christmas day and the sun was up. The Grinch had come, but once again he couldn't take Christmas from us.
Food. we needed food. I didn't come to ski or snowboard as I blew my knee out years ago surfing, yup not only does Charley not surf, but Charley doesn't snow board or ski. Snow mobiles? yup, they have cup holders on them. Charley do that. 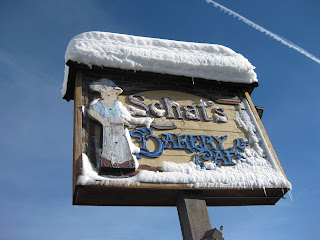 Baby and I headed out alone to grab a bite as no one else was up yet. We drove around and first stopped at Schat's Bakery and Cafe. 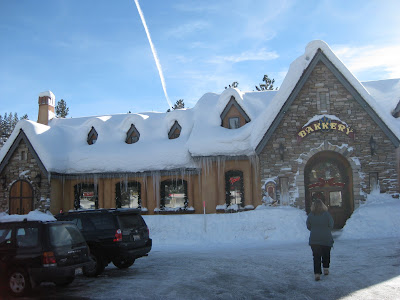 My God the aroma that came from this place was amazing. Yeasty warm inviting like being wrapped up in the warm Cinnabon cream cheese frosted bosoms of a 1966 Raquel Welch from One Million Years BC. 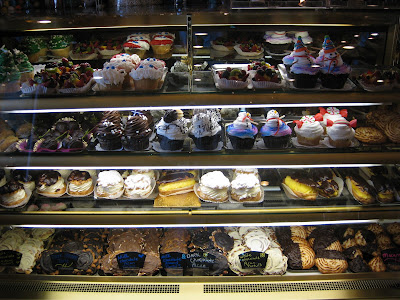 Stacked to the ceiling with fresh baked goodies. 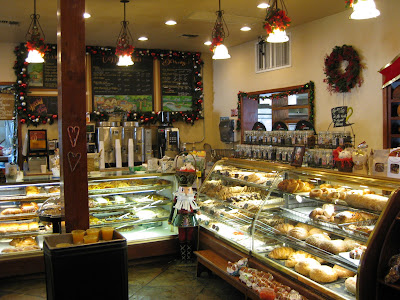 But we decided to try somewhere else. Which was probably a good thing because I could have devoured an entire bakery case like a giant chipper shredder. We were craving burgers and a beer. we drove over to the Fireside Burgers & Tap. 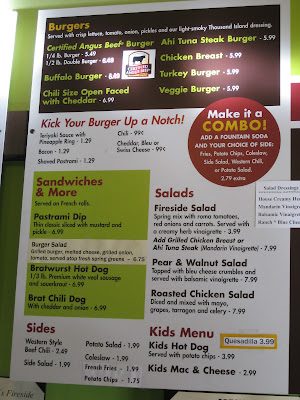 The menu looked perfect. But looks are deceiving. 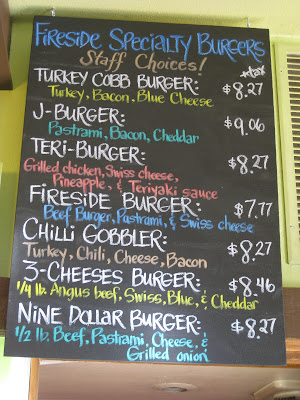 I ordered the Fireside Burger. an Angus beef burger with Pastrami and Swiss cheese. Ok, Angus beef is a breed of cattle that is either a Red Angus or Black Angus. Black Angus being the most popular breed of cattle in the US. Within the Angus beef spectrum you have a ton of certifications. You have certified. Which the Fireside has on it's menu and a good grade. Not the best but good and then you have just the term "Black Angus", which really means nothing. It doesn't denote any certification of quality or breeding. But Certified does and it's usually moist and juicy. 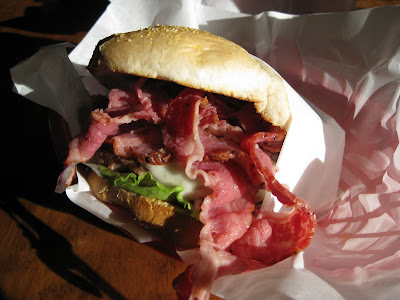 The burger came out looking awesome. Dripping with Pastrami. The Pastrami was juicy and moist and the bun was warm and soft. One bite into it and I realized why when I ordered it and asked for it to be medium rare. the cashier looked at me with a puzzled look. the meat was dry and gray like the meat from a Jack in the Box taco. You know we love them for what they are. warm gray meat on a soggy oil saturated taco shell. we expect that and they are a cult classic for being what they are. But this burger should not have been this way. you could tell that the beef was from frozen patties. 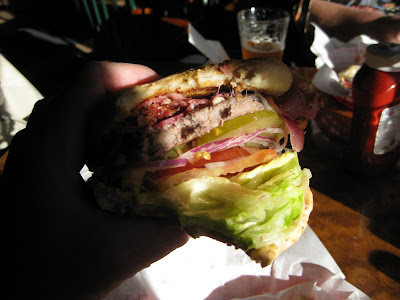 Not good eats here. But the beer was perfect. I always like to try the local beer where ever I go.
There is a brewery up here that is fantastic. Called, what else, but the Mammoth Brewing Company.
I had the  Golden Trout Pilsner.
It was delicious, crisp and refreshing just like a good lager should be. 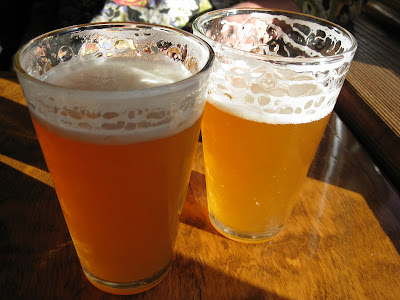 The other beer is a Real McCoy Amber, very Munichy and malty. yummy.
Stay tuned for more adventures and culinary eplorations as we continue our journey and discover more culinary treats in Mammoth Lakes, California.
Cold Chow
Michael
at 10:11 AM 5 comments: