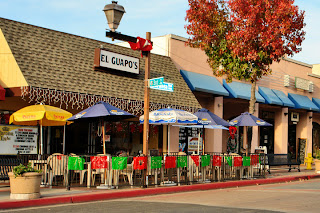 Do you remember the movie Three Amigos! with Steve Martin, Chevy Chase and Martin Short? The main bad guys name was "El Guapo. Meaning handsome one. The owner of this Mexican food place thought it would be a good idea to name his restaurant after that character.
I think that is funny and shows some originality and a sense of humor. Unfortunately we didn't have much fun on this visit to El Guapo's.
This place used to be La Torta. That incredible Mexican Deli. When we arrived for what we thought was going to be a quick lunch, we Popped 45 minutes worth of coins into the parking meter. Thinking that should be ample time for a quick bite and than back to the office. We stepped up to the cashier around noon time. Not a lot of customers, There were maybe 3 tables inside and no one outside.
We scanned the menu and decided on a Carne Asada Burrito ($5.50) A California Burrito ($5.50) and a Mahi Mahi taco ($2.95). By the way they do carry one of my favorite beers, Modello Especial, They also carry the darker version, Negra Modello as well. Oh, and they also have Coke from Mexico! Another plus as the Mexican made Coke is the original Coke recipe made with cane sugar. The Coke we get up here in the states is made with that lovely Diabetes inflicting High Fructose Corn syrup. So we were happy to grab our drinks and go outside and grab a table. You order at the counter and then they bring you the food. We waited and waited and waited. The place was not very busy at all. After 25 minutes we, along with two other tables started to get very antsy, The guy with the WAMU shirt on started to sweat and look at his watch. You could tell everyone was on they're lunch break and needed to get back to work. Minute 27, we finally received one Burrito. Minute 30 the rest of the order came out.
We dug in. First up the Mahi Mahi taco. 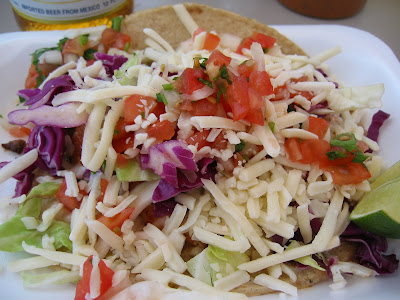 It was covered in Jack cheese, Not a good sign for authentic Mexican fare. Could not pick the taco up, it was way to wet and top heavy with cheese and very very runny. The sauce did have a nice chipotle smoke to it though, but it covered everything. It could have been a fish stick stuffed in this taco and you wouldn't be able to tell the difference. 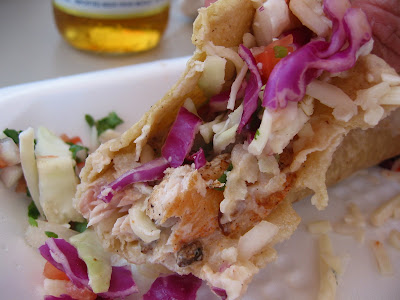 I had the Carne Asada burrito. That Southern California invention of perfection. The stuff that legends are made of. Put the original Roberto's on the map. And single handily started the Mexican Fast food drivethru craze. No such animal exists in Mexico. If you order a burrito in Mexico. You are going to get a desert dish. Looked nice from the outside. A nice stuffed 14 inch flour tortilla. I grabbed my plastic knife and cut it in half. Inside I was amazed to see more Jack cheese! and the burrito was ice cold, So cold it wasn't even able to melt the Jack cheese that was stuffed in it! 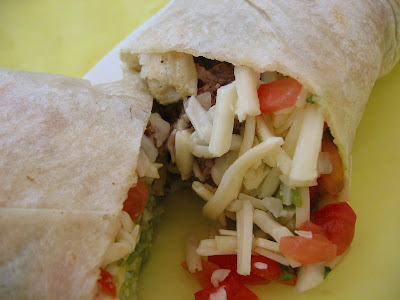 It did have plenty of real guacamole and a nice amount of Carne Asada. The meat was tasty, even though cold. It seemed to have all the right spices, A little citrusy back flavor with a rather nice texture. But after 30 minutes of waiting there was just no way I was going back up to the cashier and ask for a hot one. 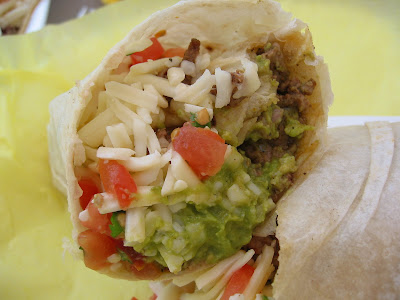 This burrito would have been passable if not for the Jack cheese and being a cold burrito-sicle. We cut into the California Burrito. Let me tell you what is in this artery clogger. Sour cream, Carne Asada, French fries and Jack and Cheddar cheese! As usual we had 911 on our cell phones pre programmed, just in case. We cut into this one and what a concoction. This one I can't get into. I guess I'm too old school Mex food kinda guy. This is the equivalent of that sandwich made with peanut butter and marshmallow sauce. I know, I know. I just never grew up with that either. 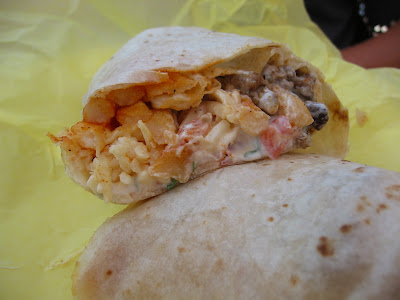 And once again. Cold as a stone. No melted cheese. The house sauce on the other hand was quite good though. It had a nice smoky Chipotle creamy feel to it, with just a little pepper heat. that one was a hit. 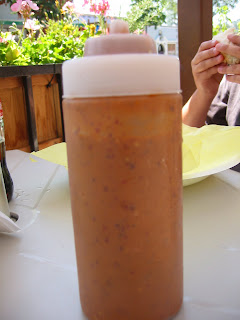 Ok. Our 45 minutes where about up in the parking meter and we weren't quite finished yet. After all it took 30 minutes to get our food. So I wandered back up to the register, which was now manned by what seemed to be the owner. To get some more change, And he was conversing with a gentleman in front of me. I stood there like a child doing the potty dance, glancing over at my car and then the meter and then the owner and back and forth again and again. Knowing that the Jawslike meter person for the La Mesa Village has about 4 blocks to patrol and is very quick with a ticket. After 3 minutes of no eye contact and no"hey I'll be with you in a minute pal" or nothing. I decided it wasn't worth the $21.00 parking ticket any longer.

So, Adios El Guapo and like the film. The Village should rise up to the El Guapo's and let them in on a secret. yup, believe it or not. the customer is still king.

"Hey,Jefe....would you say there is a plethora of cheese on that food?" ;o)

Hahahaha......Kirk, that is way too funny. I had forgotten about that "plethora" skit from the movie. I would have used it in my story.

It's too bad you've had this experience at El Guapo. You must have really hit it on a bad day unfortunately. My husband and I are born and raised in SD and have found our way around many of the best Mexican food joints in this city and Baja... we truly love El Guapo and walk there frequently from our home to have lunch and dinner there. Our food never looks like the photos you took- so I'm thinking you hit it on a "new hire day" possibly. They did have to iron out some kinks after they first opened... but, it's worth another shot. The owner is a great guy. I would mention your experience, as I know he'd probably make sure you walked out of there feeling much different this time!

Hi Mercergirl - And thanks for the comment. Glad to meet another native San Diegan as I too grew up here and spent many a summer day and weekend driving and surfing the Baja area. Great adventures,and we continue to have them down there. Being in the restaurant business for a few years has taught me that you have one shot at pleasing your clientele and that is it. When we did this review we did it a few weeks ago and not when they first opened. I have always lamented giving bad reviews even though deserved at places you frequent or love. I gave one of my favorite Mex eateries in East County a bad review even though I knew that they can do better. But the meal was bad and it is the singular experience that counts and not the sum. We will try again on your recomendation. But as usual we won't announce our presence. Keep up the good work and thanks again for your comment. We truly do appreciate it.