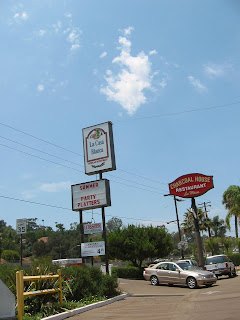 I feel like Martin Sheen from Apocalypse Now, Or in my case. Tacolypse Now. "I'm still in the jungle and it's been 5 days since my last good restaurant meal". Ugh. I hate writing bad reviews. And especially at a place that I really like and go to regularly. It brings up the moral question of, You know a place is good and you go there a lot. So they have an off day. Do you have to write about it? Answer. Unfortunately .....yes. Oh the Horror, The horror of it all. OK, enough of the Tacolypse Now stuff.

La Casa Blanca used to be one of the oldest restaurants in San Diego. The original one, and Not affiliated with this new one. Was an institution in San Diego since the 1920's. It closed down a few years ago and now it's a funeral home located across the street from St. Martins Catholic Church in La Mesa. The new iteration of this fine establishment is owned and operated by a gentleman like me who had been a great fan of the original place. He liked it so much he named his own restaurant after the original. The dinners here are superb and bring back memories of the original place. Spices are right on and flavors are all there. But today we went for an early lunch. We arrived at the place around 11:15am. And were seated promptly. Not many people in the place. When our menus arrived it seemed that we were to early yet for the lunch and dinner menu, that menu started at noon. we could only order from the breakfast menu. The visions of Chili Verde and garlic infused shrimp chili rellanos quickly disappeared into a sea of waffles and machaca burritos. Well we were already seated and were hungry. We tried to order things that looked lunchy on the menu. Enchiladas Verde $6.95 looked promising as well as the Machaca burrito with potatoes $4.95and the two beef tacos with rice also $4.95. 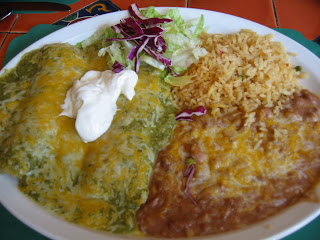 Enchiladas Verde looked good when it came out. Nice fluffy rice, very tasty with a very slight saffrony garlic background. Beans, Well. what can you really do wrong with a can of refries?

The Enchiladas you could immediately tell the reason why they were on special. Must have been leftover chicken from the night before. completely dried out and lifeless. Like Phyllis Diller laying by a pool in Palm Springs swaddled in a green towel.
Surprising very tough to cut through the corn tortilla. Not very much taste. But they were amply stuffed with chicken though. Strike one. 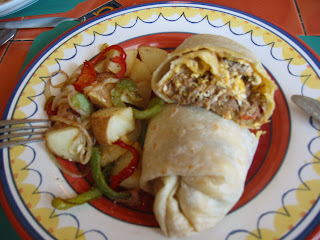 The Machaca Burrito on the other hand looked promising. Filled up nicely with a mixture of machaca and eggs, with a side of some excellent looking fried potato's with peppers. The machaca unfortunately had no taste and no spices what so ever in it. Flour tortilla cold and hard. To easy to add a joke to that line. Lots of filling in this burrito but just didn't work. Some spice would be nice here. Strike two!
The last plate we ordered was the two beef tacos with rice. Another dish that looked good at first glance like RuPaul at two AM in Soho. But like that vision after further review the vision just didn't hold up. Our tacos were filled with the same dried and seemingly burned bottom of the pan leftovers similar in texture to the chicken above. 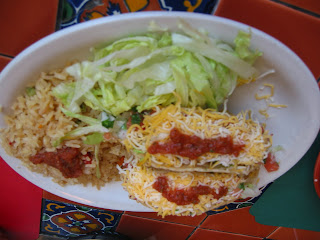 Not a good time was had here today. Need to find good eats somewhere soon. Moral of this story is. this place is still very much worth seeking out and eating. At nights and on weekends they have a lovely woman making handmade tortillas and the food is very reasonable and of above average quality. And then you can wander into the Charcoal House next door and watch the karaoke people. Just don't come here for breakfast!
Even Tardo the culinary reviewing cat got bored with the leftovers I brought back. Or is that canary reviewing cat? 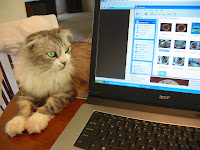 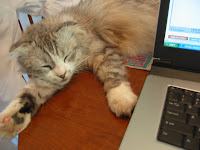