Had been a fan of Chef Todd English for awhile now. One of only a handful of creative Chefs I admire. So it was a given that we would eat at his newest Las Vegas venture Olives at the Bellagio Resort and Casino. One of my favorite hotels on the strip. And like most of the "celebrity chef" restaurants here in Vegas, it has a casual dress code and environment. Another one of those places to be seen at. What ever. We just go for the food. I had been here on another occasion a few months ago and it was superb. I had Lamb with parpadelle pasta . No longer on the menu. The evening started out with my companion and I having been seated in what would have to be the best seat in the house. The restaurant has an outdoor eating area that overlooks the Fountains at the Bellagio. And every 15 minutes or so. The music starts and the fountains light up and dance. 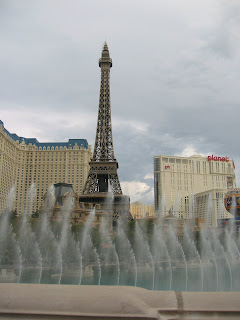 With the Eiffel Tower from the Paris Hotel right behind them. We thought nothing could go wrong. The staff were very attentive and menus brought out and drinks were ordered up. I had the Negroni Martini. Hot day, nice cold martini to start off dinner with. It had been a thunder and lightening show all day in Vegas. Hot and balmy with no let up in sight. 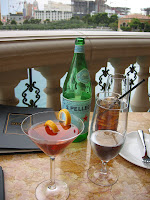 We started our dining experience this evening with the Boston Bibb Salad
shaved white onions, toasted walnut dressing, Maytag Blue cheese.....$12.00. I have to tell you it was not very impressive. First, not only were the onions shaved, But the Maytag Blue cheese was shaved by what must have been one of those new five blade shavers. No taste of that distinct flavor that this world class cheese exhibits. What was shaved on the plate tasted more like Queso Fresco. you know the stuff they put on your rolled tacos. 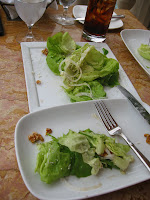 I know that a little of a strong
flavored food goes a long way in fine dining and that you just want to introduce the nuances of a distinct flavor as not to overpower. But this took it a little to far. Bland and sad. maybe like the price for a barrel of oil the price for Maytag blue has gone up as well.
In looking over the menu I noticed that not only was my favorite lamb dish gone. But it seem to be that they had paired down the beef and lamb section entirely. Todd English has always been known for his ability to create very succulent meat dishes. And now. at least at Olive's they are no more. More of a California style menu now. Lot's of fish and pasta's. Not there is anything wrong with that. To the contrary. What it really boils down to is this. If you are known for one style and then change to another. You had better be able to pull it off.
OK, Having said that I ordered the Pan Seared Mahi Mahi honey white polenta, baby carrots, butter braised giant prawns, spice market sauce. $42.00 on the menu. 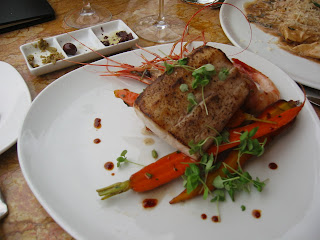 I thought the presentation was horrible, everything just piled up on high. Can't see the Prawns and the carrots. All piled on a rectangle of fried polenta. I even tried turning the dish around so I could get a better shot thinking that the server just put the plate down upside down. I must say though that the Mahi Mahi was cooked to perfection. 30 seconds more and it would not have been so moist and tender. As were the carrots and prawns. No flavor though? It had what was described as "Spice market sauce" listed in the menu? I guess the "Spice Market" was closed this day. No sauce over the fish or spice, just that, "I just cut myself "looking bleeding drips of something all over the plate.I count 9 drops of that special sauce on the plate. Maybe trendy, but not to the palette. No spice other than lot's of butter taste for the carrots and prawns. The only flavor compliment on this dish were the radish sprouts.
My business associate had the Butternut Squash Tortelli brown butter, sage, parmesan cheese $23.00. The presentation on this one was in my opinion even worse than my plate. It looked like some kind of animal had gotten sick on the plate. The Tortelli just laid there. 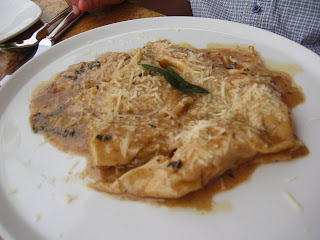 The pasta was cooked to perfection though and had a great texture to it. nice and smooth and creamy. The filling was almost inedible. It was very very sweet. This could be served as a desert dish and not an entree. sprinkle some powdered sugar on it and throw a cherry or two on top. Not savory at all. The butternut squash naturally has a high sugar content in it. and by carmalizing it in the cooking process it really starts to come through. Could never recommend this dish.
Maybe we will hit a winner with the actual desert? We ordered up Olives version of the classic and still one of my favorites. Creme Brulee. A simple but elegant dish. The one on the menu had a twist. Creme Brulee made with Myer lemons and topped with lemon curd and seasonal berries. 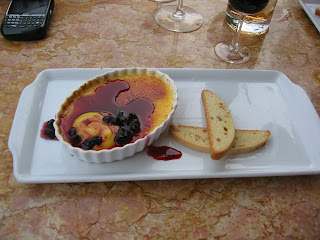 Also with Biscotti with pine nuts. ymmmy. The actual Creme Brulee was vary good. And the Myer lemon was excellent in this dish. Overkill on the lemon curd on top. The berries added a nice compliment as well. The cookies were a little to dense and tough for my taste.
Over all I don't think I will be back to this place. Too pricy and not enough panache in it's flavors and plate styling. The trend in Las Vegas has been for the last few years is to attract as many high profile chefs as it can. Todd English being one of them. But at least make it something worth while to go to and especially for the cost. What's next? Rick Bayless opening a Taco Bell at the Venetian?
Olives Las Vegas
Bellagio Hotel
Chow
Michael
at 12:06 PM