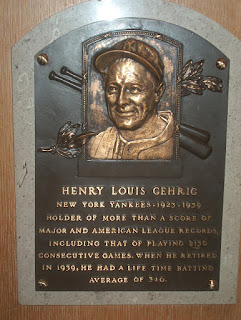 Well, I am back from my trek to Cooperstown to see San Diego’s Mr. Padre, Tony Gwynn, get inducted into the Baseball Hall of Fame. To say the least, it was one of the greatest moments in my baseball life to be among such greats. Cooperstown, I might add, is a charming little town in the middle of the mountains. And the people who live there are among the friendliest I have ever met.
As I grew up forty miles outside NYC, it was exciting to go back to some of my old haunts. Shea Stadium is where I practically grew up. And when Michael heard I would be going to both Shea and Yankee Stadiums, well I was asked to test and write about the hotdogs. Not a problem! So here goes!

Shea Stadium boasts Nathan’s Hotdogs so even before getting to my seat, off to the concession I go! (I had been in New York City’s Manhattan Mall last November, and had a Nathan’s – what I think are the best hotdogs in the world.) So I order up my Nathan’s and ask the 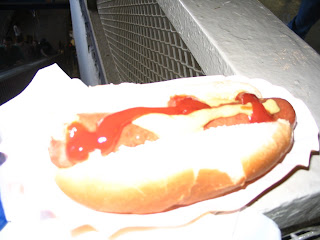 concessionaire where the condiments are?? She said, “In the hallway.” I looked and looked. I didn’t see any counters with condiments? Then I looked at the wall to see a plastic shelf with packets of mustard and ketchup. What the heck? No onions, no relish? Nope. So I dressed my hotdog in the availables, took a bite and ……. NO WAY WAS THIS A NATHAN’S HOTDOG!!! IT WAS A CHEAP IMMITATION!! This was verified at lunch the next day with one of the couples on our bus tour, Jim and Pam from Minnesota. Jim also said the hotdogs were not Nathan’s, and I didn’t even prompt him. And then the whole table agreed.

Off we went to Cooperstown on Saturday afternoon, and to our dismay, our bus blew a radiator hose and we were stuck at the New Jersey Turnpike Vince Lombardi Rest Stop for the afternoon. And there was a Nathan’s Hotdog Store. I ordered up one just to see, and sure enough, it was one of the best hotdogs I had ever had and it was definitely a Nathan’s. If you never had one, they pop when you bite into them and they have a thin chewy skin to them. I was then totally convinced that Shea Stadium was running a scam.

We finally made it to Cooperstown, thank God. We wouldn’t have been a very happy bunch if we missed “Tony and Cal’s big day.” We headed back to New York City where we attended a Yankees – White Sox game. Ok, Hebrew Nationals here. And they were true to their word, they were real Hebrew Nationals. They were good, just as good as the ones you buy at the local grocery store and cook yourself. You don’t have to be at the ballpark to get this hotdog. Go 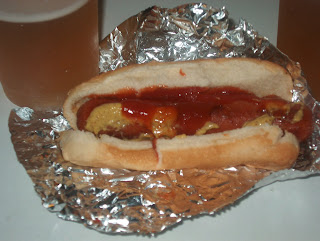 to Ralph’s, Albertson, Von’s … and you don’t have to travel to the Bronx. Oh, and also, the same deal on the condiments. Only packets of ketchup and mustard. What a shame.

One thing I will say, though, about the Bronx. We went to a restaurant/bar called “The Yankee Tavern” a few blocks away from Yankee Stadium on 161st Street where I ordered a Pastrami on Rye. I was in heaven!!! All my new friends at the table were jealous! I told them, when you are in New York, it’s a must! It was served with slices of the best pickles in the world and of course, an Amstel Light. May 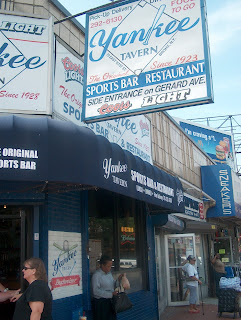 I suggest if you are ever in the neighborhood, stop in. Great service, great fans, great food. And I don’t even like the Yankees!! But after my visit, I thought the Yankee fans were some of the greatest in baseball. I am so happy that there will be a new Yankee Ballpark in 2009, the Yankee fans certainly deserve it. And I’ll be back for some hotdogs, for sure.

Putting ketchup on hot dogs is proof that you hate yourself.