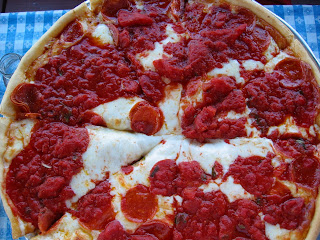 We ventured over to Lefty's Chicago Pizza place today in our ongoing Quest to find the best pizza in San Diego. This place is located in an area in San Diego called North Park, Which has some of the best restaurants in town and all walking distance from the neighborhoods it surrounds. Very lucky North Park residents. Lefty's is no exception. This is such a great little find. A great Chicago style eatery that serves up some tasty stuff. No bigger than a standard size living room, it can be tough to stand in line and order, as this is as busy a place as Bronx Pizza. But this place goes way beyond your just a pizza serving restaurant. Lefty's serves up some of the finest and most beautiful looking old school Midwest style of food in San Diego. And cheap!
We walked in to find no one in line and we seemed to have caught the place in a not so busy time, a rarity on a Saturday. 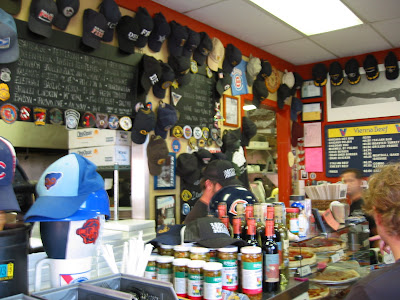 They have a very East Coasty type attitude here. But if you have ever been or have friends from the East Coast, you know that it can be taken for being rude. But in reality it's really not. They are a brash group. I for one think it humorous. Anyway, we stepped up and ordered a Chicago style thick crust with pepperoni ($18.00), as usual, just what the Quest specified. We did think, but just for a second, to order the thin crust instead. But nope, You can't go into Bronx Pizza and ask for a Chicago style pizza and you shouldn't go into a Chicago style pizza place and order thin crust. So thick it was. They told us it takes at least 35 minutes to cook it. No problem, we wanted to soak up the place anyways. They have beer on tap and one of the handles is for PBR! Ya gotta love that. They have pizza by the slice and have a gorgeous assembly of the offerings in a glass case. 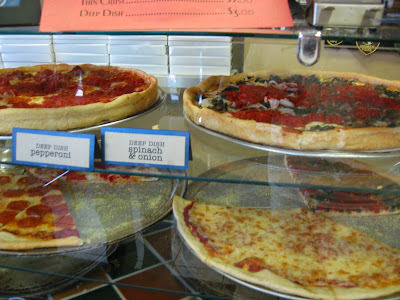 We walked outside and sat at one of the open tables. Remember this is such a small kitschy little cozy dive. They have a small group of plastic tables and chairs for the customers. As we sat and talked, we began to notice the food that was being brought out to the other diners around us. Chicago style hot dogs and Polish dogs and something called "loaded fries" that we should feed to condemned men as they're last meal. because after eating it , it would be! It looked gorgeous though. Mounds of fries covered with sour cream and huge chunks of crispy fried bacon bits. The Chicago style hot dogs looked picture perfect. They had a nice wedge of pickle on them and two little yellow sport peppers. Just like a real Chicago dog. Big plates of pasta came out to the table next to us. Amazing looking food. And all very reasonably priced. Hot dog with fries ($4.50)
OK, There is a reason, as usual I had to go on about the other food on the menu. This place, just for the other offerings alone and the fact that it carries pizza. And as you know, the place that holds the number one spot currently on the list only serves pizza. Based on that. Lefty's would win hands down, no questions asked. But if we are just ranking on Pizza alone. Well then. Bronx wins hands down. The pizza here looks amazing and came out to our table literally piping hot and still sizzling. 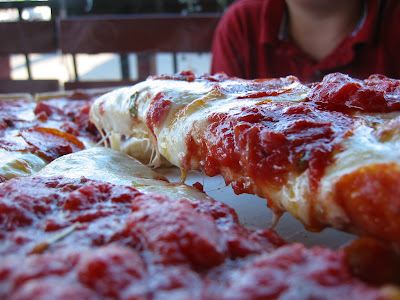 It had a huge amount of Wisconsin Mozzarella on it and in traditional style. cheese on the bottom and sauce on top. The tomato sauce was chunky with large pieces of tomato and fresh Basil sprinkled all around. The pepperoni was put on in abundance and was everywhere you looked. 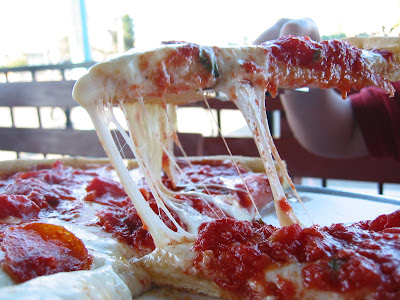 It just looked spectacular. The crust looked nice and think, with large amounts of corn meal evident. Which I think adds a nice texture and taste to the pie crust. Too hot to handle this pie was, So we nabbed a few pieces of pepperoni off of it. WOW! The best pepperoni in town. really nice and flavorful, had a nice spicy bite to it, and greasy as all get out. Just dripped everywhere. 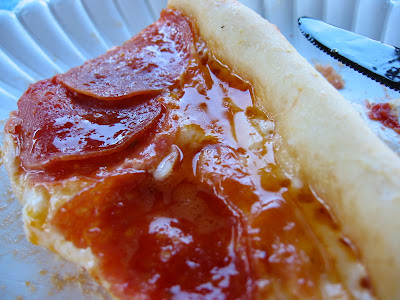 Every pizza house in town should get the name of this brand and trash the pepperoni they use now. I thought it quite amusing though looking around I noticed that the adjacent eatery next door was a Vegan restaurant. I just chuckled out loud as I watched the Vegans having to walk past and see Lefty's, that pit of voracious carnivores, eating every ground up farm animal on the planet on they're way for a slice of falafel pie. 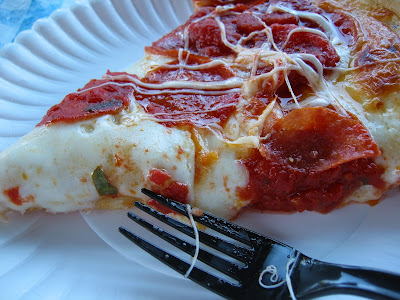 This pie is a thing of beauty to look at. But beauty as usual is only skin deep. The crust had no taste other than corn meal and actually was quite mushy and chewy. It was more of a foundation that was utilitarian in it's quest to hold up to the mounds of cheese and sauce. The sauce had a nice fresh taste to it. Mild though, very mild. Too much so for my taste, nice tomato taste and chunky texture and I loved the addition of the fresh herbs in it. 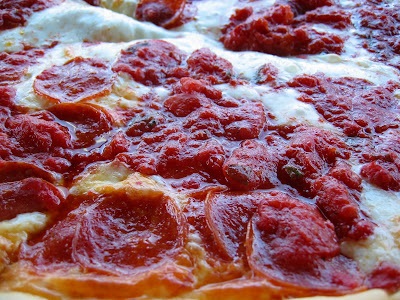 The writing is still no so good. But the photography is comin along!
Reminds me....I need a snack too.

Oh my god! Michael,
this pizza looks perfect. It doesn't look like most pizzas that simply look like a piece of bread with cheese. I definitely have to go check this out when i come back home to Chicago I'm surprised i haven't heard of this before.
There are simply tons of restaurants that still need to be explored! Actually, my favorite food is pasta and pizza.

Thank you for posting about this!