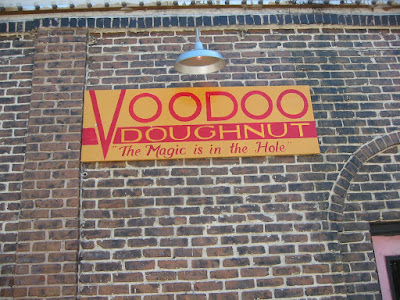 This is one place I had wanted to go to for a very longtime. Being a fan of independent thinkers, youth culture and motorcult stuff. The thought of an artsy donut place run by youthful entrepreneur's appealed to me. Visions of Bettie Page injecting Bavarian Creme into maple bars ran through my head. The moniker outside the place reads, "The magic is in the hole". Nope, The magic is not getting mugged or killed trying to get to this place. It is located in the skid row section of Portland. We knew were in for a treat when we stepped up to the entrance only to be very kindly welcomed by an older woman smoking a joint who had very obviously just soiled herself. There goes that olfactory sense for at least the next few hours.

This place is as big as your closet and dirty as heck. My partner in grime wouldn't even try one of the donuts. There were quite a bit of tourists in the place, so no elbow room. and they looked like deer that had been caught in the headlights of your car. that was very entertaining to see. People from the Midwest meet soiled stoned woman and try to buy panties in a donut shop. Yes woman's undergarments can be had here. Not a cute place and no Bettie Page's either. 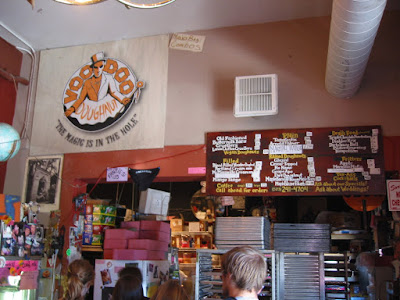 The product, I mean the food product didn't look all that special either. Very old fashioned stuff and not much innovation for a place with a look and culture like this place touts. This is what happens when kids in Portland smoke to much weed and start giggling uncontrollably as they stick pretzels into dry and tasteless mashed together voodoo donuts. And then chase each other around grandpa's house spewing Oreo's out of there mouths as they laugh themselves silly. But then reality hits and the joke wears off pretty quickly. The product is definitely dry and tasteless as this place. As always, there is that very fine line between camp and comedy. this place misses by a long shot. 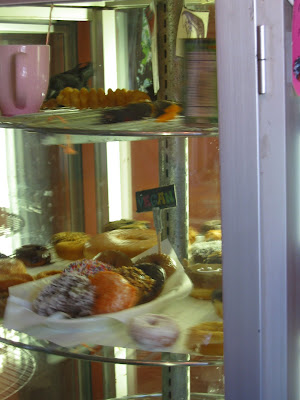 These were the only donuts on display. We grabbed our stuff and tried to avoid eye contact with anyone and slipped out the door. The soiled lady doorman was still on dooty, literally. I love Portland. It is definitely the last vestige of hippydome left in the country. But the mojo has definitely left Voodoodoo donuts.

Hi Michael - Being an old fashioned kind of guy, I enjoy doughnuts from Voodoo. I haven't had any of the funky stuff like the "Triple Chocolate Penetration" or Maple Dougnut with Bacon...but I've enjoyed the old fashioned glazed(beats the pants off Krispy Kreme) once or twice. If you think this place is kinda....I guess you use the word "dirty"....you haven't seen some of the places I've eaten at in the SGV.

Hello Kirk, Maybe we caught this place on a very bad day. There was no inventory other than the 12 or so highly heatlamped donuts in the case. And it was very unclean, sanitarywise for a food place. The otherstuff I had expected to be there. Going up to the area in October. Maybe will try it again. I must say though that the area is rich in eateries and such.

When my girls, 17 and 19 and my childish husband 45, saw you on the food network it was like magic. They had to plan a trip. We are from central California near Lake Tahoe and we drove up in our 5th wheel to visit my in-laws in December, they are in Florence OR about 4 hours away. I had a migraine for a week and we were set to head home the next day, but because of the migraine we had not gone to Portland yet. We took off about 2 pm to Portland and my daughter and I spent 4 hours sharing the driving. My head was pounding and I was starving. We got there about 6 and I ducked into Kaiser for a shot of Dilaudid for my head. the only thing it did was to cause us to be 5 hours later. We stopped into burgerville at 10pm to have a quick bite which I quickly vomited up because of the pain. We then went to your shop, the original one. I thought it would be about a 30 dollar deal when I came out $90 poorer I was shocked but decided as long as the doghnuts were good. Because of my intense pain we decided to stay at Holiday Inn rather than back to Florence at midnight. At the hotel we broke open a midnight snack as I put on my t shirt hat and panties to sleep in. We ordered 4 cock n balls, 3 of which had to be made up at 5 bucks a pop. The girl stacked them on each other and you couldn't even tell what the heck they were for pictures for our album. The 5 voodoo dolls 2 were stale, 1 had no pretzel and 1 had no blood inside. The worst of everything was, DUDE HAVE YOU EVER HAD A YEAST PRODUCT THAT WAS NOT COOKED ALL THE WAY? I WAS SOOOO FUCKING SICK. YOUR TEXAS DOGHNUT WAS DOGHY AND I, NEEDLESS TO SAY SPENT THE NIGHT AT KAISER ALONG WITH MOST OF THE MORNING FOR THEM TO GET THE GAS OUT OF MY GUT. SO GET THIS, NOT ONLY DID MY TRIP GET ME AN ASSLOAD OF PAIN, BUT OUT $80 PLUS OUT 70 FOR THE HOTEL, PLUS OUT $150 FOR THE NIGHT AT KAISER AND OUT $50 FOR THE MEDICATION TO GO HOME WITH AND ON TOP OF IT, OUT 200 FOR MISSING 2 DAYS WORK BEING SICK FROM YOUR FRIGGIN DOGHNUT!!!!

NEEDLESS I WILL NOT BE BACK AND WE HAD A NICE BURNING CEREMONY WITH YOUR SHIRT, PANTIES AND HAT.