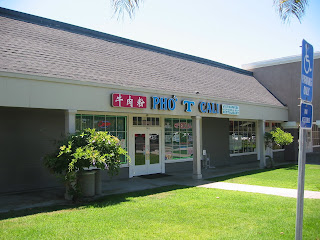 I used to come to this place a lot when I worked up in the Clairemont Mesa Blvd area. I surely miss the luxury of having some of the best eating establishments in San Diego at my gastronomical finger tips. So today I found myself back in the area on business and had to decide where to eat, What an ordeal, easier to pick which one of your senses you would give up than to pick a restaurant in this area. Let me think, Shall we go to Jasmine, or Tommy's burgers, Ranch 99 for a sandwich or Aladdin...ugh. Just good stuff overload. Sometimes it's a tough gig choosing that right piece of chocolate out of the box.
I finally decided on Pho T Cali, But I believe the name has changed. I used to come here a few years ago and it wasn't bad. As I entered the building I noticed that most of the servers faces seemed familiar at least if they have had a change of ownership the crew looks like they stayed on. Good sign. I was quickly seated and handed a menu. Interesting verbiage on the inside cover. it had an explanation of what to order and expect if this is your first time here. I found that quite amusing, having been eating Vietnamese food for a few years and could remember back when I couldn't even tell you what was in the bottles of condiments on the tables let alone order.
But wait. I still can't really tell you whats in those bottles on the table. Oh well, somethings never change. The reason why I love Asian Cuisine in San Diego is that old theory of mine which is most of the really great Asian places are still run by first or second generation families that cook as closely to they're original style as possible. Hence the usually large numbers of Asians that go to the good ones. But this theory on food and authentication really holds up to all nationalities. It seems that by the time the third and definitely by the fourth generation. The majority of eateries lose that authentic edge as they're core clientele leave or move out of the area and a more homogenized eating public moves in. That I believe is what has happened to Pho T Cali. They lost there nationality cooking compass. Not that the food was bad. It was just ordinary. Like lining up a Tommy's Burger and a McDonald's one. Both are hamburgers but one is great and the other not so great. 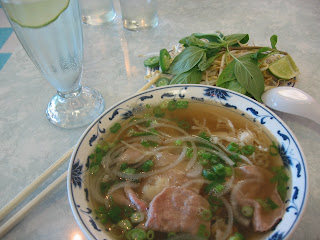 I had the Tai Nam Gau Gan Sack ($4.90)
A soup bowl filled with,Rare steak, well done flank, brisket, tendon and tripe.
Also ordered a Lemonade with soda water in it ($2.20)
The Lemonade was exquisite. It had such an intense lemon flavor with a super sweet finish to it. The soda water gave it a nice tonic but clean finish. Great hot day refreshment. 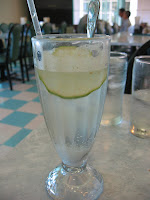 The Soup broth was very mild and lacked any taste, Wasn't bad, but just lacking some flavors. The jalapenos and basil along with a squirt of lime and some Srirachi hot sauce made it come alive. But the broth on it's own should have had a little more oomph to it. Granted, I am not an expert on the nuances of Vietnamese cuisine, I just know what tastes good and what doesn't. 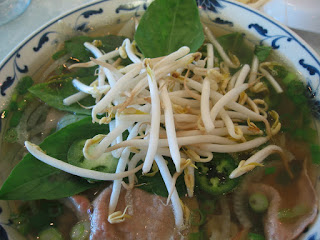 The steak, tendon, tripe, flank and brisket were all very tender and done well. Not a lot of fat or harsh gristle. Overall not a bad experience, But in an area that is so rich in great eateries. This is a shame. I don't think I will be back for awhile.

PS. Another reason I like Asian places so much is that they are well lit. Makes even my photography almost tolerable. Someone has to tell those Mexican and Italian places I go to about adding a little more light.

What's the diff between that pho bowl and the regular sized dac biet?

Meatballs? Yup, I believe the answer would be the addition of meatballs. I still don't know all of the intricacies of the incredible wonders of the Vietnamese menu. But I do know the food to be one of my favorites.
Always so clean and fresh tasting.