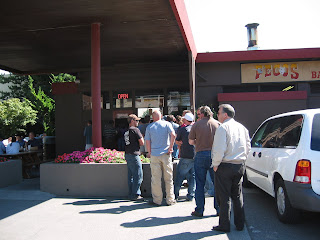 We ran across this little consummate classic dive of all dives. Just a straight no nonsense take out BBQ joint in Seattle Washington. We arrived around 11:15am and there where a few people eating at the various wooden tables that scattered around. No indoor seating. No line as we rolled up to the window and checked out the menu. Just three items. and that is it. Choice of a pulled pork. Pulled beef, Beef brisket sandwich, Oh and the sides consisted of a link and beans. and that is it! All of the sandwiches were $6.40 each tax included. a link on the side was an additional $1.45. The aroma was out of this world. I stepped up to the plate and asked the woman behind the window what was the most popular and she very nicely asked if this was our first time here? To which of course we replied "yes". She then told us that it was basically a tie between the Pecos Beef and the Pecos Pork sandwiches and that they were both pulled and shredded. and the brisket came in slices. The sandwiches come wet and I mean very wet with your choice of medium. mild or blazing hot BBQ sauce that they make. I asked for the Pecos Beef with medium heat BBQ sauce with a side of a link sausage and beans. She wrote my order on a brown paper bag and called it out and then passed the bag back to the cooks who were behind her. this bag I thought was just ingenious as it not only served as the order pad but the actual vessel in which to put the order in. And in less than a minute I was handed my brown bag filled with this magical concoction of shredded beef and spice. we sat and opened our bags like kids opening a gift bag at a birthday party. And the sandwiches that we pulled from these humble little brown bags were truly astounding! I have not been a fan of BBQ for years. In San Diego you might have maybe 1 or 2 good BBQ places, Heck, even Huffman's BBQ just doesn't taste like Huffman's anymore. 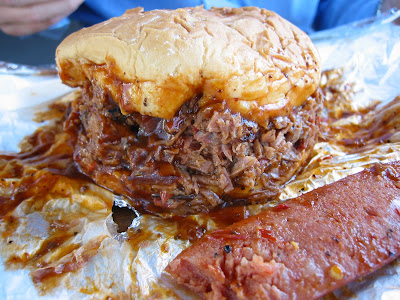 This was one of those rare foody finds that you dream about encountering. Just phenomenal service and product and dare I say, The best dog gone BBQ I have ever had this side of the Mississippi! This sandwich was just bursting with moist and tender shredded beef. And although I ordered it with the medium heat sauce. it was still mild for me. Maybe I just have jaded or scorched taste buds now after eating at Ba Ren and Dao Son (Thanks Kirk). It had just a wonderful hickory smoke taste running through it. and you know when you have had good BBQ, when you can't wash the sticky sauce off of your hands no matter how much soap you use, and that hickory smoke lingers on your taste buds and clothes for hours after like a good cigar. No way you could pick these babies up with your hands and hold them to eat. They came with a plastic spork and 5 napkins. The plastic utensil was the only way you could eat these guys. the bun was merely there to stop the sauce from running all over the place. I just cannot say enough about the flavor and texture of the beef. it had an awesome mixture of slightly charred outer beef mixed with a moist and tender inner section, a great indication of that long and slow cooking process that great BBQ brings out. The sauce was very different in a great way. it had a slight Mexican style / Southwest jalapeno heat to it. It was a perfect combination. 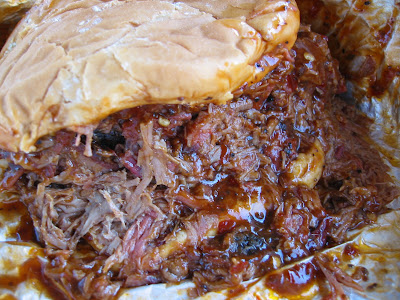 Like a great Asian eatery this exhibited spice Nirvana. An incredible balance of spices. sweet with heat. The Link was a little hors’dourve, A teaser of spice and texture. I don't know if they make these here but incredible as well. Nice pop to it and great spicy heat. You can definitely see the chili pepper seeds sprinkled throughout. 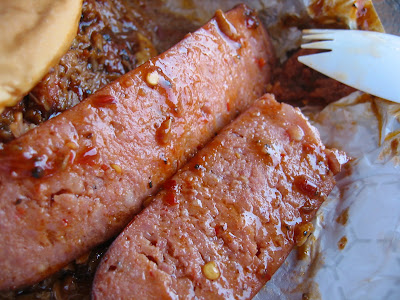 The beans were of the same quality. You can tell that someone here is passionate about what they make and serve. Nice and tender with chili peppers and onions and bacon bits. Oh My! 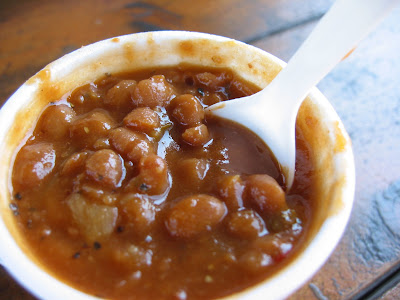 Love it when there is a true culinary artist behind an eatery. We sat there an ate our miraculous lunch and started to notice that huge lines began to form. And as we looked around at the other tables there must have been 30 people now eating and at least 25 in line. 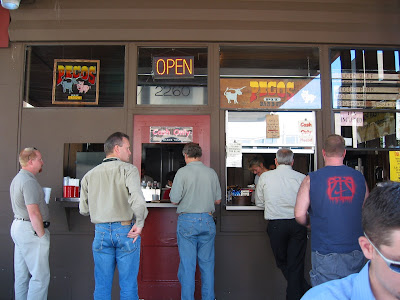 And they kept on coming. By the time we left it was a virtual feeding frenzy of the Washington State few and privileged who knew of this place. 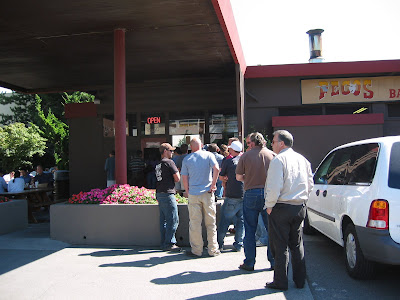 So remember if you ever find yourself in the Seattle area, this place is tucked right behind Safeco Field in an industrial area. It looks like and old gas station but smells like heaven.
Only open from 11am to 4pm daily. and worth the plane ticket from anywhere is Pecos Pit BBQ!
One more look for ya to drool over. 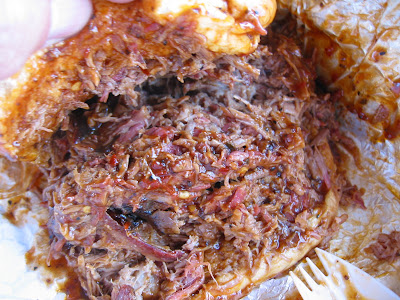 Hi Kirk, You need a plethora of napkins my friend! I was wearing a white shirt as well.

Nice post Michael, after reading it, I am convinced I need to fire up my pit for the coming holiday weekend. You have me craving some smokey good Q.

Thanks CJ. it was truly a trial by fire. or I should say trial by hickory smoke.

next time my family goes to seattle, we will definitel try this place! nice photos!

Hey caninecologne, I love that name by the way...very clever. You won't be disapointed with this little BBQ dive.But get there early.


keep up the good work with your blog...

just read your new post about the Italian place on Jamacha. The clam dish looks good - I'd like to try that next time!